Mauritius holidays come with the promise of pleasure, luxury, romance, relaxation and adventure for all tropical lovers. Mauritius is home to some of the most breathtaking white sand beaches in the world. Which are often described as those mimicking heaven.

But that's not all this serene country has to offer. Visitors will enjoy the beauty of the lush, green rain forests and magnificent mountains. These provide sanctuary to many rare species of marine as well as terrestrial animals. This, combined with its rich, unparalleled history and vibrant culture, makes the island an exotic Eden for all wanderers.

Let us make your Mauritius 5 Star holidays the best travel experience. On one hand the bustling capital city of Port Louis beckons the young and impassioned. And on the other hand there is the relaxed village life of Le Morne luring tired wanderers to its shores. Then there are the beautiful aqua lagoons and coral reefs of Flic en Flac to explore.

There is also the lively nightlife of Grand Baie with its open-air bars. There is something thrilling to experience in every corner of this island. By going All Inclusive, you can live out every escapade. And also relish the splendid, exciting facilities and services offered by all the unique resorts in the country. 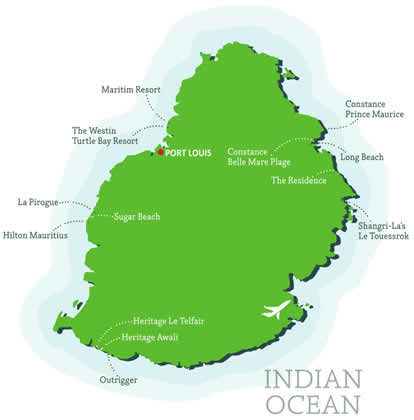 Located on the Domaine de Bel Ombre on 2500 hectares, It is the member of the Small Luxury Hotels of the World.
£1399 pp
7Nights, Half Board
View Details

Situated just four miles from the lively town of Grand Baie, Le Cardinal Mauritius is a top choice for those looking to holiday in style.
£1479 pp
7Nights, Hlaf Board
View Details

The glorious Maradiva Villas Resort and Spa, Mauritius is the perfect destination for those looking to holiday in style.
£1899 pp
7Nights, Half Board
View Details

One and Only Le Saint Geran

A world class stylish property, One & Only Le Saint Geran in Mauritius is set 60 acres of verdant tropical garden on a aprivate peninsula.
£1949 pp
7Nights, Half Board
View Details

When it comes to luxury holidays, it is hard to beat?Shangri La Le Touessrok?Mauritius.
£1449 pp
7Nights, Bed & Breakfast
View Details

The truly stunning beach resort that is Shanti Maurice, Mauritius is nestled among lush green vegetation and offers magnificent views of the Indian Ocean.
£1499 pp
7Nights, Half Board
View Details

Mauritius, an island nation, lies in the Maskarene Archipelago in the Indian Ocean, around 2,000 kilometers off the bank of Africa. It offers voyagers genuinely heavenly landscapes - from seashores with white sand, through thick wild wildernesses, to superb mountain tourist detours. For quite a long time, Mauritius has become to some degree far away from other African nations. A large number of years back, the island of Mauritius was shaped over the indented mainland of Mauritania, on volcanic plates.


Things to Do in Mauritius

Mauritius Holidays offer plenty of amazing things to do. This includes a variety of water sports on charming and attractive beaches. Visits to nature reserves and exploring marine life. Enjoying golf on impressive golf courses and also making the most of the many luxury resorts which offer fantastic facilities. Mauritius comes close to the top of most people’s holiday vacation list. This is a firm favourite among all kinds of travellers. For quite a long time, Mauritius has become to some degree far away from other African nations. A large number of years back, the island of Mauritius was shaped over the indented mainland of Mauritania, on volcanic plates.

The shores of Mauritius are lined with luxurious resorts, many of which boast their own spa onsite. Take the chance to unwind and treat yourself to some pampering at one of these wellness centres. They offer everything from full body massage to facial treatments.

The island’s main tourist resort is located in the north. It is within a sheltered bay dotted with bobbing boats and packed with activities for visitors. The streets are lined with excellent shops and restaurants. Visitors can also check out local tourist information centres to plan their next excursion. There’s even an aquarium, so kids are sure to be entertained on their visit.

The capital of Mauritius is well-known for shopping. This is the ideal location to get some souvenirs in whilst on holiday. It’s not all about the shops though, as Port Louis is also home to some fascinating museums. This includes the Blue Penny that covers colonial history and the Natural History Museum, which houses an ancient dodo skeleton. You can explore China Town, go up Signal Mountain to see the view etc.

The colonial Eureka House was constructed in 1830, and nowadays showcases the life of aristocrats in 19th century Mauritius. This beautiful wooden house was once a sugar plantation. It overlooks a lush tropical garden bursting with leafy palms and fruit trees. There are also several waterfalls that add to the tranquil feel of the grounds.

Mauritius is well known for its golfing; indeed, the island is home to almost a dozen top class courses. Some golf courses are connected to resorts. You can select to stay at one of these resorts to make the most of playing golf during your stay.

It is impossible to choose the best beach in Mauritius. So be sure to sample as many as you can while there. The island is renowned for its picture perfect beaches complete with beautiful white sands and clear delph-blue waters.

.Get out into the great outdoors and explore the area of Chamarel. Soils in tints of blue, green, red and yellow, all produced by the erosion of volcanic ash are found here. There are also impressive waterfalls and the charming Chamarel Village, within which you can learn more about local culture. As well as sample some delicious Mauritian dishes.

Mauritius has a rich and diverse culture with the population mainly consisting of Hindus, Christians, Muslims, Creoles and Europeans. People in general are friendly. They celebrate a variety of festivals and speak different languages based on their ethnicity.

The islands colonial past is reflected in the island's vast cultural diversity. Its inhabitants create an unusual mix of races, religions, skin colors and languages.

Creole and Hindus have the largest share in the ethnic composition of the population. Europeans and a small group of Chinese live here as well. Over half of the population is Indian (52%). A large percentage are also Catholics (26%) and Muslims (17%).

The official language is English, but a significant part of the population also speaks French. French based Creole and various languages ​​from India are widely used.

Mauritius has a rich and national culture. It is cultivated by numerous national theater groups and folklore groups, as well as by many local artists. Music and dance play a very important role in the islands culture and customs.

The national dance is sega. It is very dynamic and spontaneous and has its roots in African rhythms. Reminiscent of an African sambe.

Mauritius has tropical weather throughout the year. It receives a good amount of rain during the monsoon. This comes towards the middle and the end of the year. There is an average of 8 hours of sunshine every day and the water temperature barely falls below 25°C.

The best time to visit Mauritius is from May to December when the weather is cool, dry and sunny. Expect some of Africa's best beaches, fresh seafood, delicious cocktails and long, sun drenched days on a Mauritius holiday. The island has a classic tropical climate with warm weather year-round.


How long is the flight to Mauritius from UK?

Passports must be valid for at least 6 months for visitors from date of entry in Mauritius. All visitors must hold legal tickets and documents for their return journey or onward travel. Visitors must have sufficient finances for the duration of time in Mauritius.

Mauritian cuisine is quite diverse, just like its culture. Visitors can enjoy a mix of Creole, French, Chinese and Indian food depending on their tastes and preferences. Mauritius is also famous for its seafood variety.